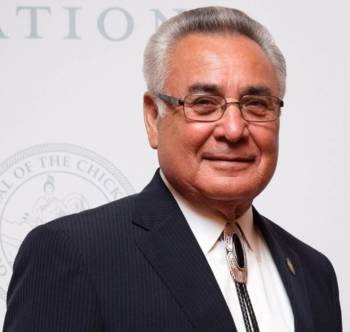 Jefferson Keel serves as the 22nd President of the National Congress of American Indians (NCAI), the oldest, largest and most representative American Indian and Alaska Native tribal government organization in the country. President Keel was elected on October 2017 at NCAI’s 74th Annual Convention to serve a third nonconsecutive term as President of NCAI.

As a proud Native American, President Keel is firmly committed to the service of Indian Country. Serving his fifth term as the Lt. Governor of the Chickasaw Nation of Oklahoma he is keenly aware of the roles and responsibilities expected of tribal leaders and earnestly believes in the policy of “helping our people through honorable public service.”

President Keel also represents Indian Country on numerous national boards and committees including serving on the Board of Advisors for the Center for Native American Youth, created by former Senator Dorgan at the Aspen Institute. In addition, he was appointed as one of nine commissioners to serve on Tribal Law and Order Commission established under the Tribal Law and Order Act in 2010.

President Keel is a retired U.S. Army officer with over 20 years active duty service. He served three years of service in Vietnam and received numerous awards and decorations for heroism, including two Purple Hearts and the Bronze Star with “V” for valor. He is a former Airborne Ranger, infantry platoon sergeant, platoon leader, and served as an instructor in the elite U.S. Army Rangers.